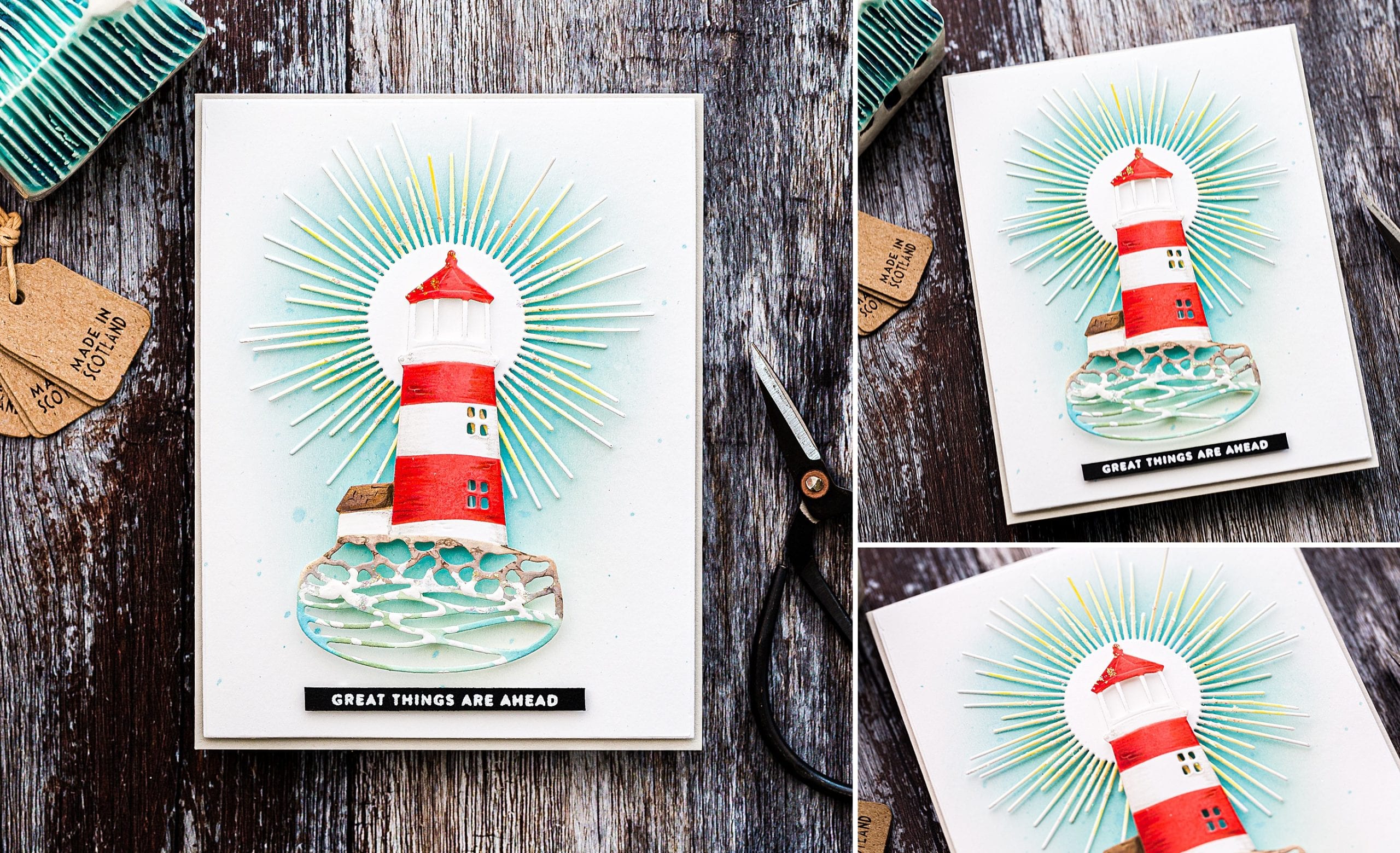 Being the 14th of the month, today is the reveal of the new Simon Says Stamp card kit for January. However, I knew that the kit would likely be a little delayed in the postal system at this time of year, so rather than have nothing to share with you I made this card inspired by the Burst die from the recent Diecember release. The burst is excellent for the holiday season but is also perfect for representing any light emission such as this Lighthouse die. I’ve linked all supplies at the end of this post. Compensated affiliate links used where possible at no cost to you. 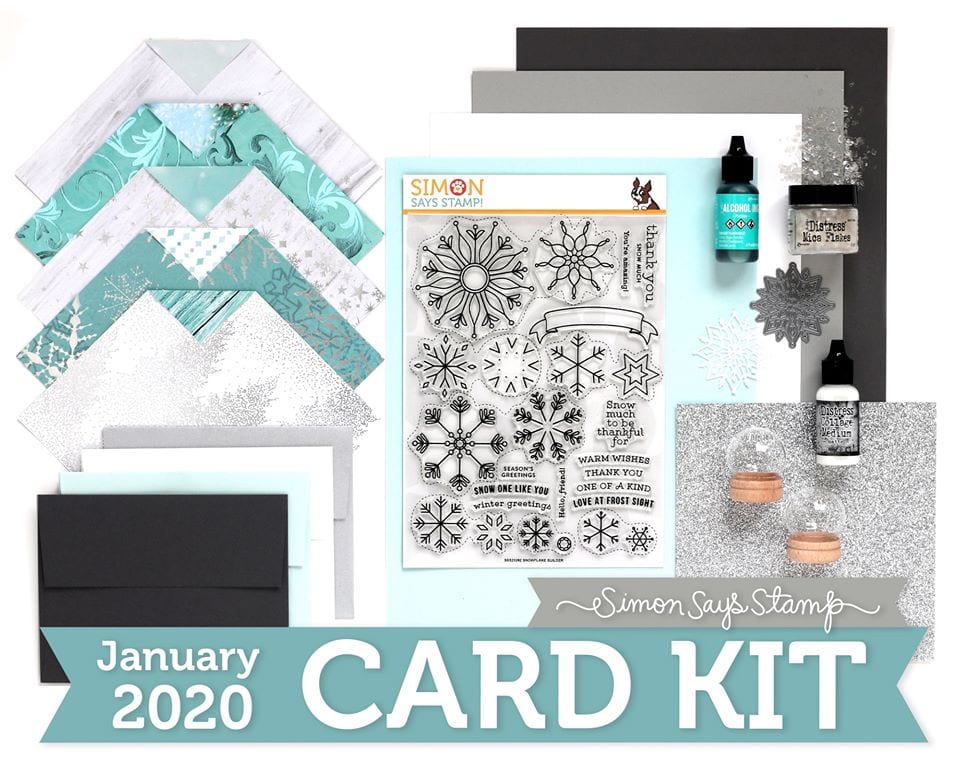 Before I get onto how I made my card, here’s a look at the January Card Kit and what’s included. I hope to get my kit soon and share inspiration from it with you. 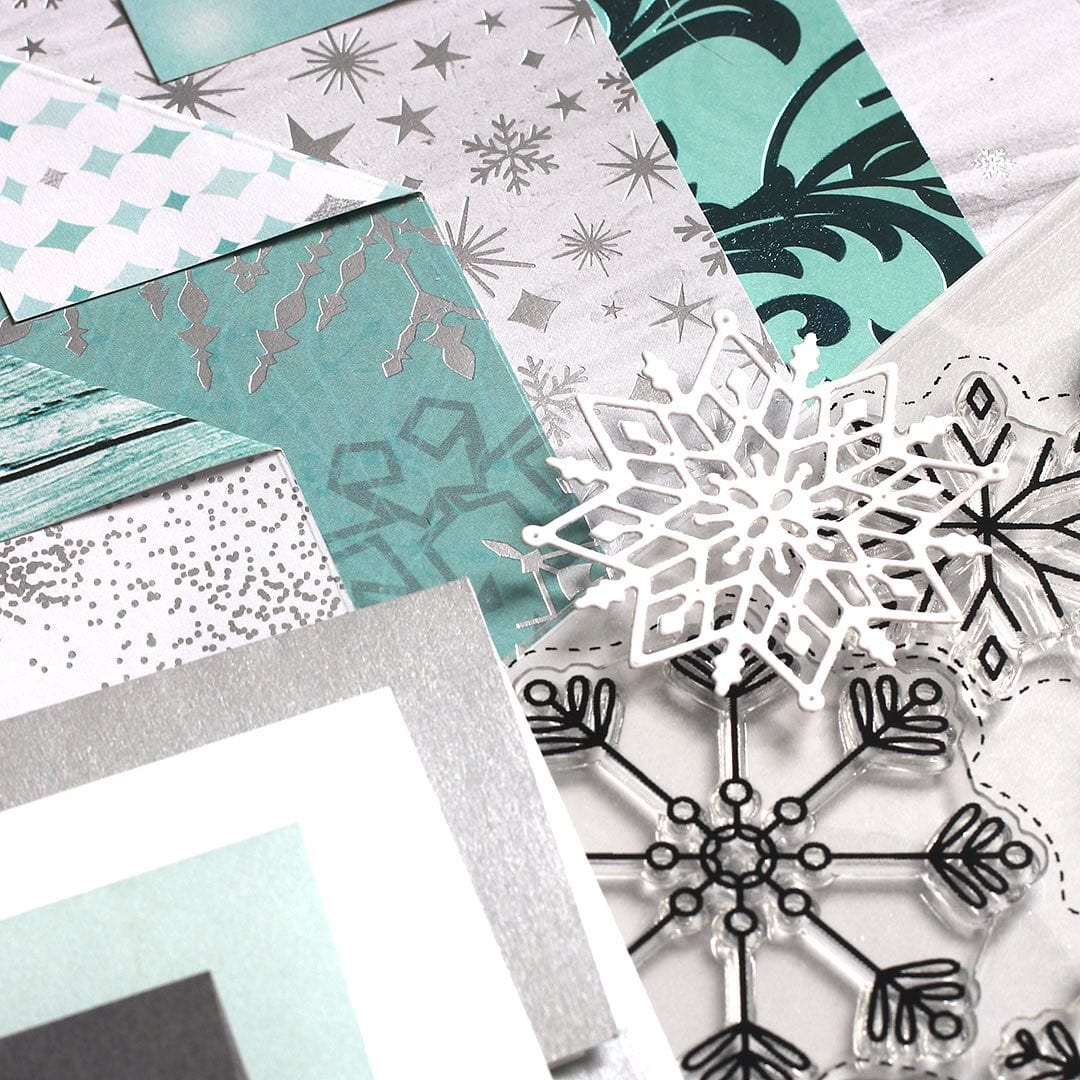 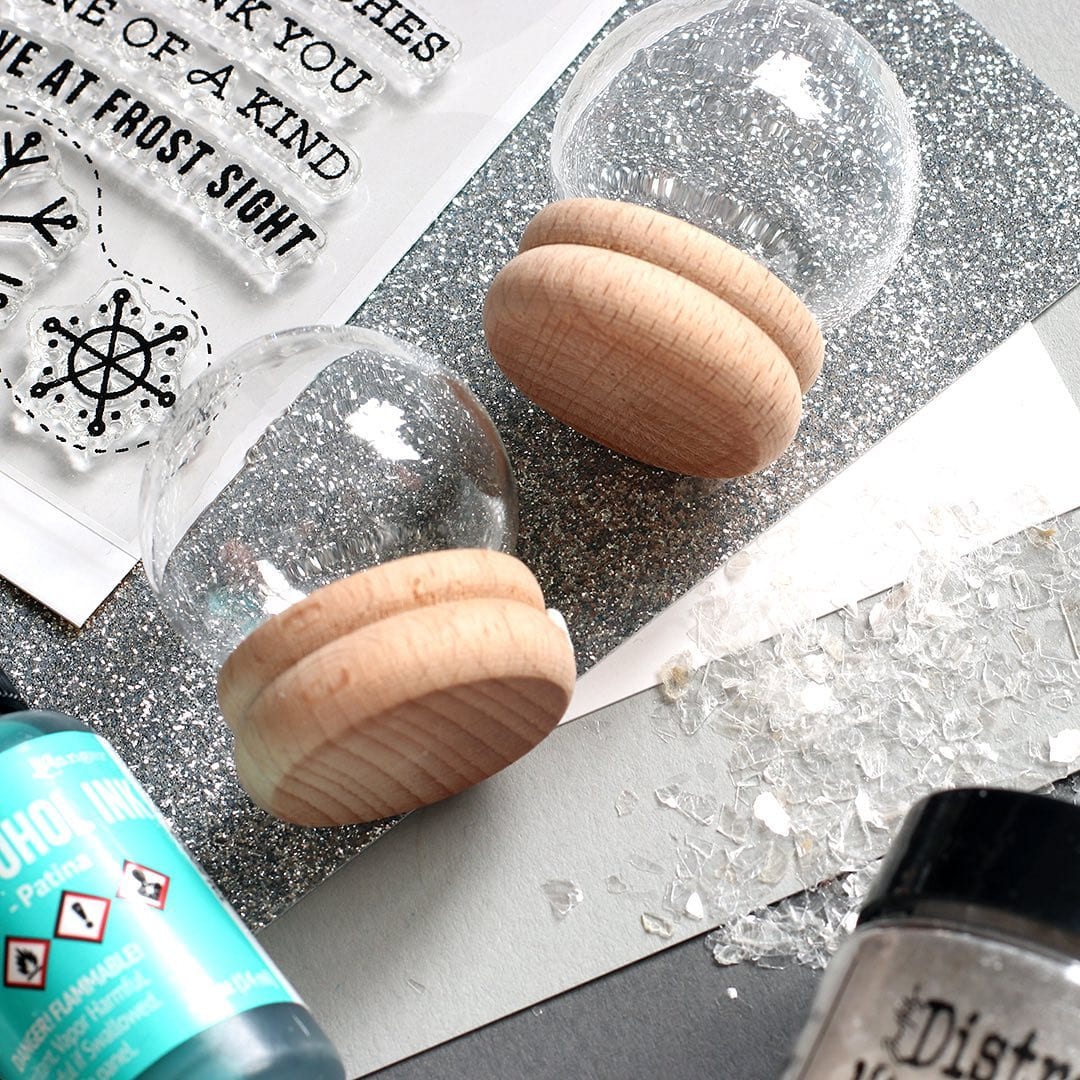 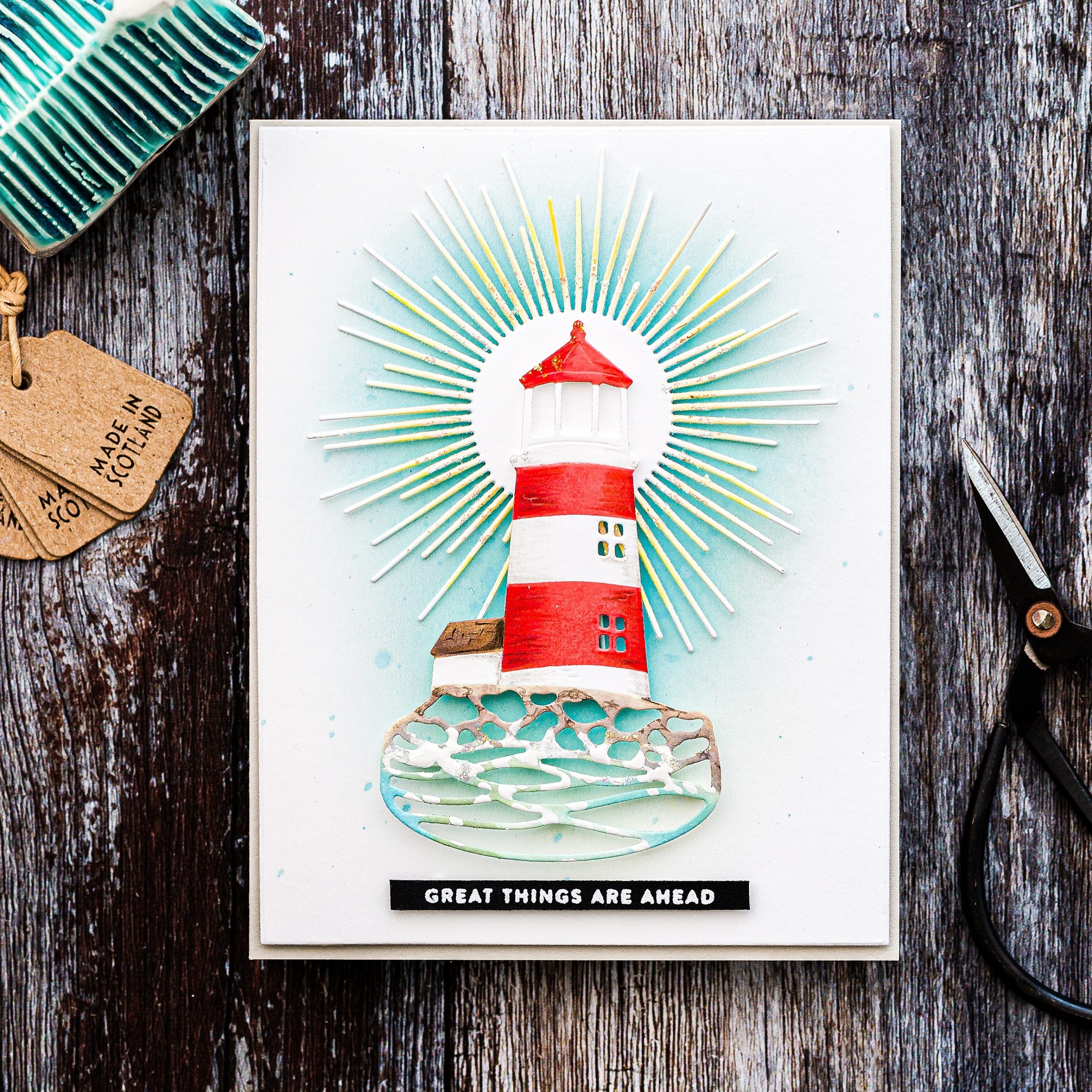 Back to this card, and I started by die cutting the Burst die from Neenah Solar White 110lb card. I left the die in place within the negative portion initially and added a die-cut circle of masking paper over the centre. I then gently blended Squeezed Lemonade, and Dried Marigold Distress Oxide inks over areas of the Burst die cut. Keeping the die in the negative portion supports the delicate rays of the die while adding the ink, and then when done, I gently teased the die-cut out. 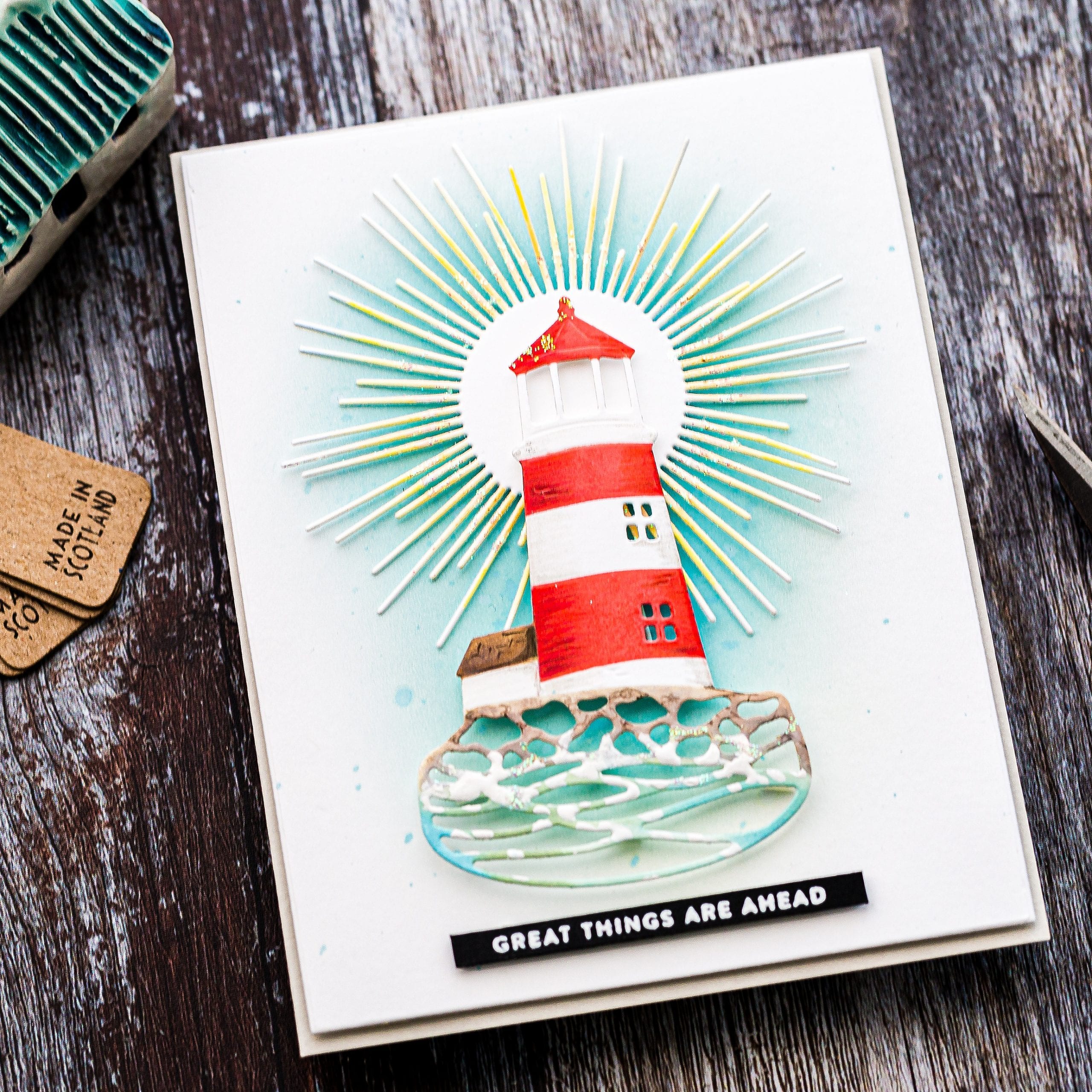 I also cut the Lighthouse die from Neenah Solar White card and again used masking paper to aid with ink blending over specific areas of the die. For each of the three bands of red, I masked the other areas and then blended with Abandoned Coral and Candied Apple Distress Oxide inks. Working my way down the die-cut, for the rocks I used Antique Linen, Pumice Stone and Walnut Stain and for the sea, Tumbled Glass and Bundled Sage. Finally, for the roof of the house, I used Walnut Stain. I then took coloured pencils and added a little shading here and there to create the rounded dimension of the lighthouse and dotted seafoam on the rocks with white gouache. 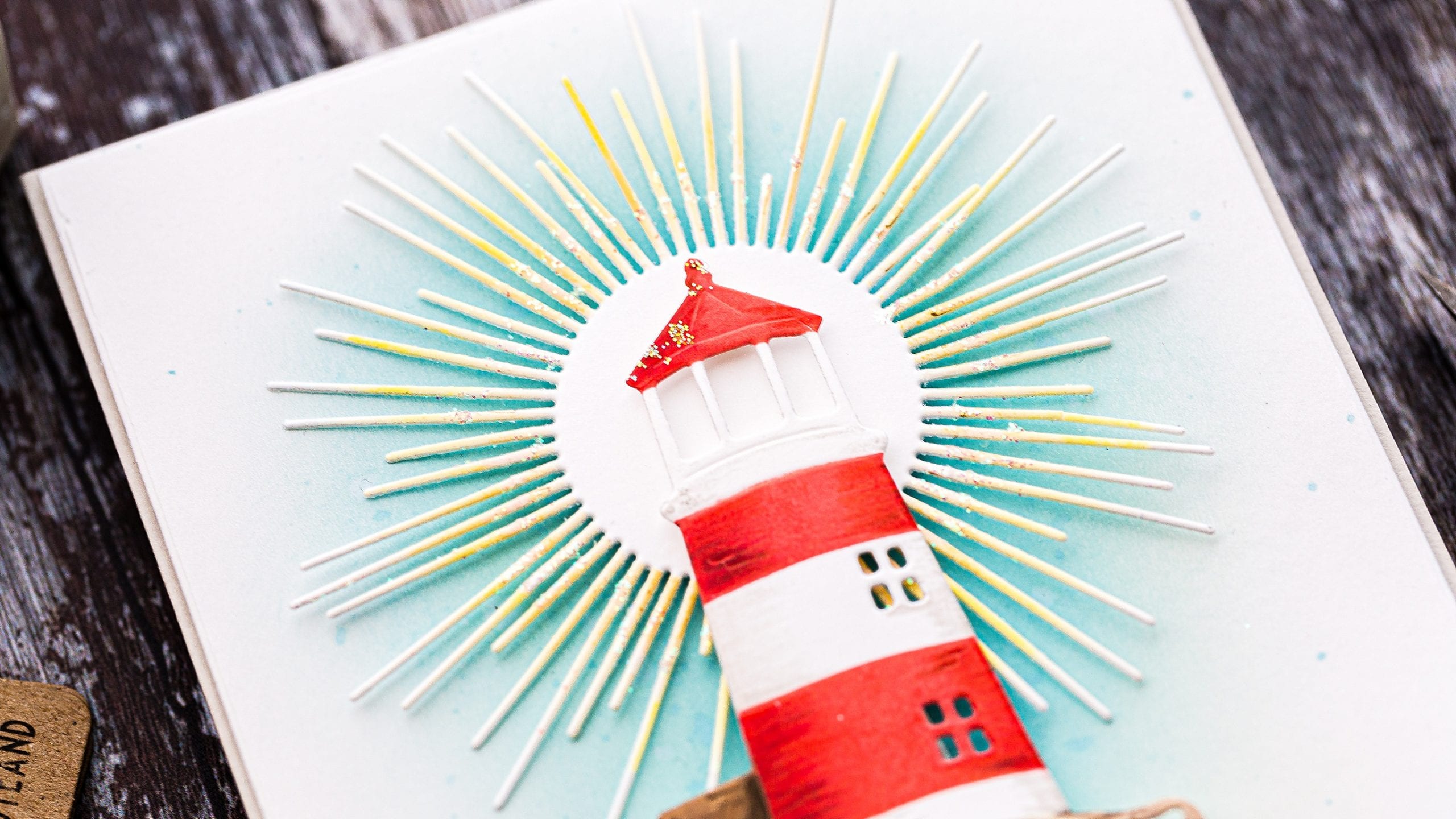 I die cut a background panel with an A2 Thin Frames die and lightly blended Tumbled Glass Distress Oxide. I also picked up some of the ink with a wet paintbrush and splattered that over the background too before adhering the Burst and Lighthouse die-cuts with foam adhesive.

For the sentiment, I took a greeting from the Tiny Words Encouragement set and stamped in clear embossing ink on a Black card before trimming to a skinny banner and adding to the bottom of the panel. I mounted the panel on a Fog card base, and finally, I took Crystal stickles and dotted the Burst Stencil with a bit of extra sparkle.

You can find links to the supplies I’ve used below; click on the picture or shop icon to get taken directly to the product. Where available I use compensated affiliate links which means if you make a purchase I receive a small commission at no extra cost to you. Thank you! Items marked with an asterisk (*) provided by a store or the manufacturer. You can read my affiliate and product disclosure here. I genuinely appreciate your support.

Summary of the project which gives all the views of the card in one photo :D I’d love if you pinned and called by on Pinterest :D 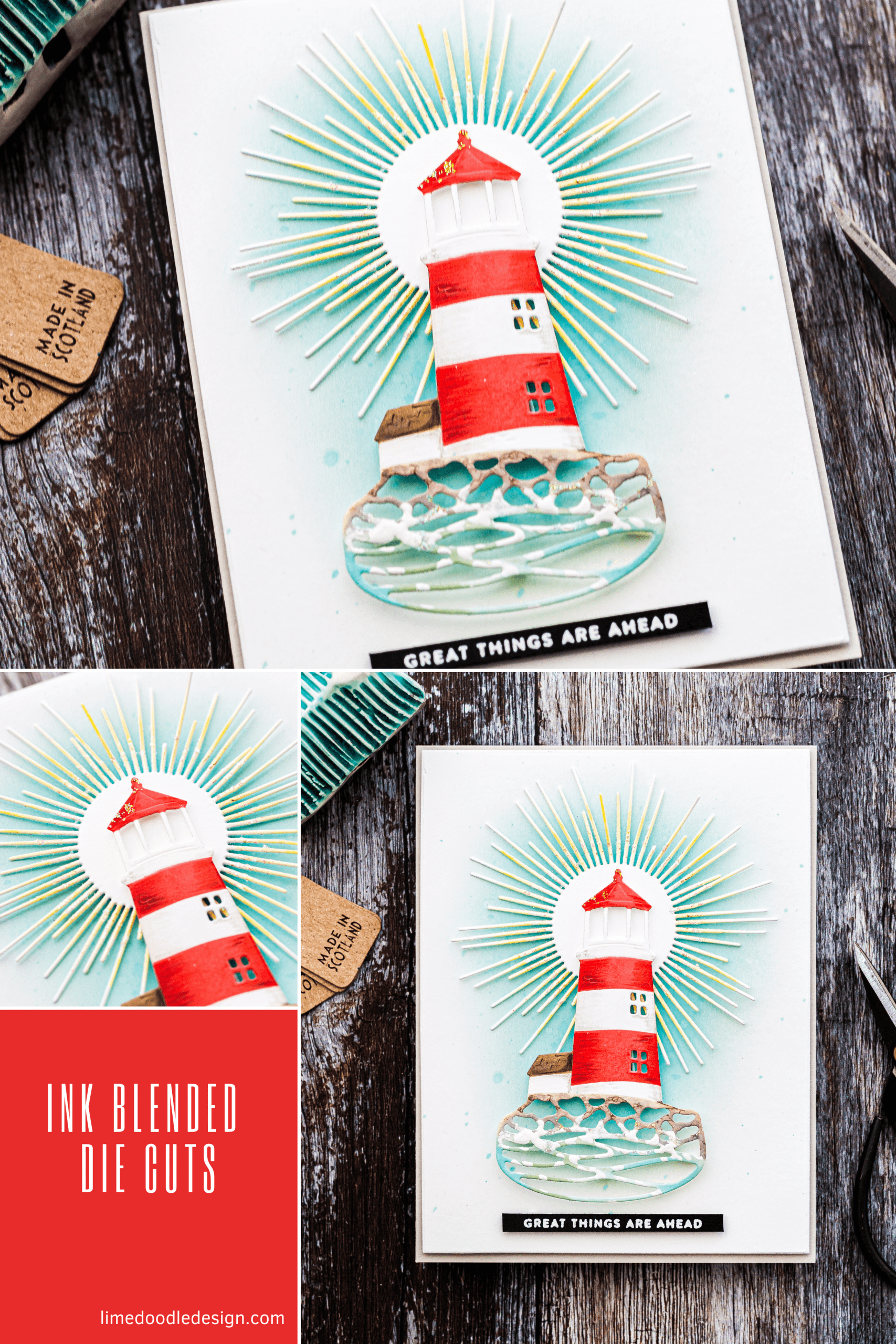