Exactly the way that you are 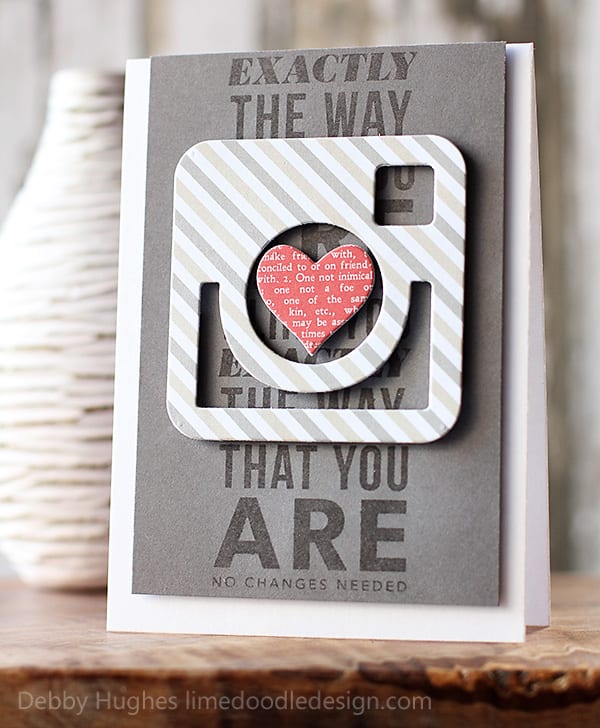 How about something a little different and non-Christmasy for a change? Isn’t that camera die from Kelly Purkey just fabulous! I cut the camera and heart from some patterned paper and popped them up over a watermarked sentiment stamped onto dark cardstock. The sentiment from Kelly Purkey’s I Like You set is stamped twice and the camera fit perfectly so the start of the sentiment is visible above and the end below. Don’t you just love when things line up that way :) I think this would be a great card to give to a guy however, I think I should perhaps send it to myself!

Yep and probably I’m guessing to a bunch of you guys too. How about some blunt honesty for a Saturday morning. I’m painfully camera-shy, always have been but the passing of time and the changes to my body have made me more so. Believe it or not it was blogging that got me back in front of the camera! When I started on Design Teams people wanted to put a face to the name and so reluctantly I braved the lens. I don’t think I will ever like having my picture taken but hey you know what, this is me, wrinkles, crinkles, laughter lines and excess pounds. I can’t say I wouldn’t want it differently but being absent from photos isn’t going to change any of that. So in the next wee while I will be handing the camera to my daughter and asking her to snap away :) Do you fancy joining me on the other side of the lens?