I buy a lot of my stamping supplies from Simon Says Stamp and I have to say they must’ve put wings on my last parcel! In the order I added a Simon stamp set designed by Kristina Werner – Furry Christmas. I couldn’t resist the set itself and then when you hear the story of how it was conceived I just had to pop it in my basket even though I wondered if it would arrive here before my Christmas cards were finished. My parcel arrived really quickly and so yey, I got the chance to get this cute set inky :) 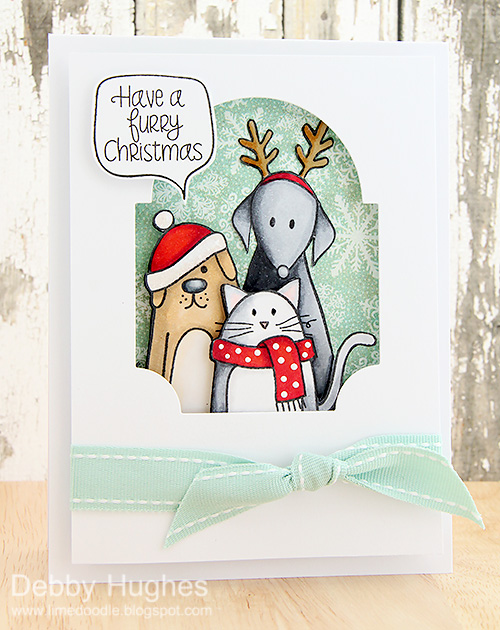 Now I have to say my animal colouring skills are a bit rusty so I took inspiration from the examples of the set coloured up here. That’s definitely Kristina’s cat Mannie there and the dog on the left (Kathy Racoosin’s dog Max) is probably a mish mash of all the examples. However, I had to make the dog on the right (Jennifer McGuire’s dog Roxie) in the image of my sister’s mischievous black lab! Looking at my card now I realise how close it is to Kristina’s with the negative die cut. That came about as I stamped the image 3 times and layered them up. Bottom layer all three cuties, middle layer left dog and cat and finally top layer just cat. Believe me there is a LOT of dimension in this card as each of the layers is popped up. I did think of having these guys in a snow drift but by the time I’d popped everything up I didn’t think snow drifts would be that deep and so a negative die cut it was. I actually like the dimension but wonder what this would look like as a one layer card …….